From Street Fighter to World Champion (with Eric Melton)

Today I’m at the Mpact Sports in Franklin, TN talking to Eric Melton. As the owner and head of martial arts, Eric works with children and youth to inspire them to develop their physical but also spiritual abilities. Former Kickboxing Champion, Eric finds his joy and purpose in passing down the wisdom he learned through his fights, the ones that got him in trouble as a young man, and the ones that got him US titles.

Check out these highlights:
0:15 – Tajci gets knocked down by a Kickboxing Champion

4:49 – Tajci pauses when Eric non-nonchalantly says he ‘would get arrested from time to time.’

8:07 – Eric Melton’s turning point happened the moment he won the world championship. And it was about forgiveness and realizing that Love he was missing had always been there

13:31 – “You have to learn to be a teacher” – great moment when a champion is learning to teach kids

Tweet this: “People bring kids, they want them to change. It doesn’t happen over night. My heart was hard to change”-Eric Melton http://bit.ly/1FG9bO6

Eric Melton – a Street Fighter, World Champion and a Mentor

Eric is a fighter. He started out as a street fighter, hanging out with the kids on the ‘wrong side of the tracks’ – robbing houses and cars, stealing and fighting. His mother fell ill when Eric was 11 or 12 and died several years later. His father ‘wasn’t interested in family’ and offered very little guidance to Eric, who says he was left to justify his actions on his own.

When he tells me how they would ‘get arrested from time to time,’ I actually had to interrupt him and bring the reality of it into my understanding. I want to cry for this child who was out there getting deeper and deeper into trouble without guidance or love that he could recognize.

During one arrest, a police officer presented him with a choice – jail or martial arts. Read more here. 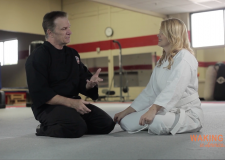