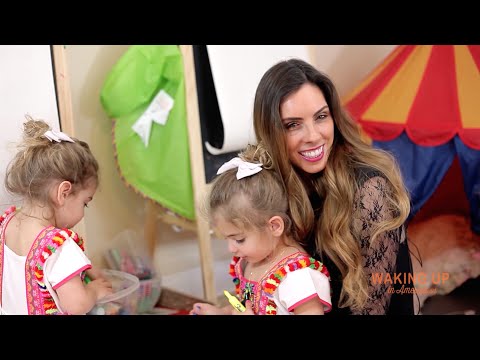 Finding Lucinda in the “Queen of Spin”

5 min read
Add comment Watch LaterRemove Cinema Mode
Facebook Twitter Email Google+ LinkedIN
I traveled to New York to meet up with my friend Lucinda Ruh a beautiful soul who is celebrated as the Queen of Spin the fastest spinner on ice ever. She’s the world Guinness record holder as the longest spinner on ice, two-time World Professional figure skating bronze medalist and a two-time national figure skating gold medalist. Lucinda is a mother, philanthropist and author of “Frozen Teardrop”, The Tragedy and Triumph of Figure Skating’s “Queen of Spin”.

It happens to all of us to a certain degree – we develop one thing we really love and start identifying with it. It could be our work that we get passionate about, or our children that we lose ourselves in. We lose any sense of who we are apart from that passion.

For high-performing athletes, musicians, artists, and professionals, the focus and discipline needed to achieve the top levels of success is demanding and often utterly overwhelming, leaving very little room for anything else. Sometimes it’s puzzling to hear how some of them struggle in their personal lives, and we find ourselves asking how someone so successful could be unhappy. It’s hard to accept that the very thing we love to do and identify with could also be detrimental to our well being.

LUCINDA RUH, the Queen of Spin

Lucinda Ruh is one of those generous souls who offers up the story of her life so that we might benefit from the lessons she’s learned along the way, and perhaps answer the question of whether our passions define us through her autobiography Frozen Teardrop – the Tragedy and Triumph of Figure Skating’s Queen of Spin.

I met with Lucinda at her current home in New York to film our Waking Up in America interview. Taking into consideration her status, her accomplishments and her lifestyle, it wouldn’t have been unusual for us to have arranged a highly stylized setting for our interview, but instead we sit on the floor in our dresses and heels, surrounded by the paints, easels and playdough with which her twin daughters Angelina and Angelica are creating pictures of the sky, pineapples, mommies, daddies and things only recognizable by the heart of a child. It turns out to be the most perfect, magical and authentic place to be.

Lucinda was a top-level athlete, the world famous “Queen of Spin” celebrated for the longest, fastest, most creative and magical spins on ice. Commentators and journalists called her a “ballerina on ice” and the audience was firmly on her side, giving her standing ovations and booing the judges if her marks were disappointing. For her, it was about more than just the technical side: “For me, every performance was really like a painting. Like I was painting a story… ” she says.

She loved to spin, but is quick to explain how much it became her escape, almost like an addiction behind which she kept all that she wasn’t able to express, especially given the environments she grew up and trained in.

“[In] the Japanese culture, you don’t speak your mind… [or] your feelings. You kind of hide everything. So, I think everything was so stuck inside.

When I was spinning I was showing it through my body. But once I couldn’t spin, [with] my body collapsing, it was like my body showing that, look, you can’t do this anymore and not be Lucinda. You’re not living the life of Lucinda.”

Her beautiful world-record-setting spins were causing her repetitive mini-concussions which were sending her body into a collapse. She endured great physical pain, and for several years was virtually bedridden. At the same time, she was hurting emotionally because, in order to restore her health, she knew she’d have to let go of the one thing she loved the most, the one thing that had become her identity.

She loved her career, her accomplishments and the mark she made on the figure skating world, but the point came when she knew she needed to make a shift. She needed to identify herself first as Lucinda, not as ‘the fastest spinner’ or ‘the figure skater.’

During recovery, Lucinda came to the realization that the sacrifice wasn’t worth losing her life. She had achieved her dream of “doing something nobody else does” and it was time to let go and move on. She chose to stay in the game and continue winning as a whole person – no longer on ice, but in life.

As we talk, I notice that her signature smile which her fans so loved, the one that never left her face on the skating rink, is now even brighter with the joy, gratitude, and awe that come with being a part of creating new life:

She doesn’t hide the fact that the transition was hard. But she also says that she is grateful for every step of the way. Holding her daughters close, she smiles her big smile and concludes our piece with the most beautiful thought that uplifts and inspires just like her skating routines did: To add to your experience of Lucinda’s story, I’d recommend viewing some of her past performances: 1999 World Skating Championship and 1999 World Pro in Washington, D.C. 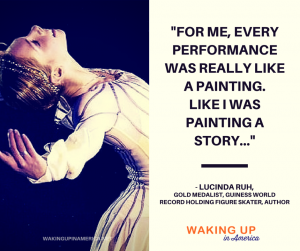 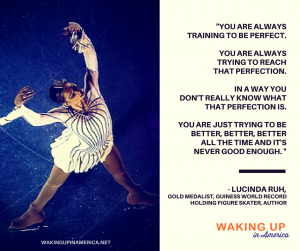 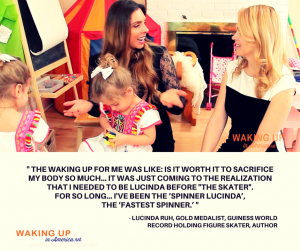 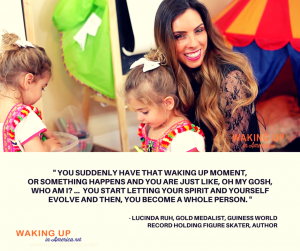