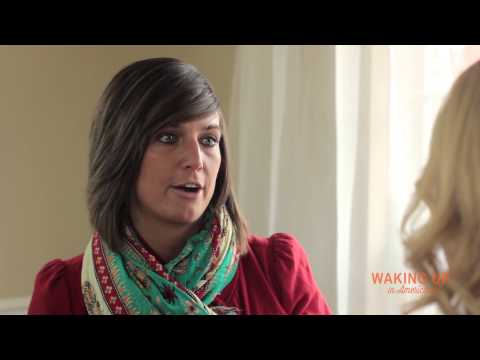 Waking Up Debt-Free (with Brittain Kovac)

Brittain Kovac calls herself the Chief Nomad at Hostel KC, the place where sleep has a purpose. In her not-so-spare time she runs experiential marketing, works with startups, volunteers, leads missions, explores foreign lands and looks for any new opportunities to enjoy life and serve others.

In our lives, we almost always have to deal with money. Lack of it, plans for it, worries about how best to use it, negotiations for more of it. It’s always going to be a consideration, no matter the circumstance.

On the path of waking up from someone else’s dream and living the life we are created for, money is definitely one of the factors we encounter and have to deal with. Period.

As Dave Ramsey, financial author, radio host, television personality, and motivational speaker says: “You must gain control over your money or the lack of it will forever control you.”

For some of us, it’s the fear of money (or the lack of it) that prevents us from getting out of a miserable, unhealthy situations. For some it’s the debt that we carry that weighs us down.

Instead of letting our money issues paralyze us, we should try to face them head on. The first step is investing time and effort to learn what a healthy relationship with money looks and feels like; how to create wealth and how to manage it.

There is a lot of information available on the subject: great free online content, radio and TV shows, educational and motivational books and e-courses. It’s everywhere!

There’s so much out there, it’s almost like a manifestation of the old saying: “In America the money grows on trees, you just have to stretch and pick it up.” (With ‘money’ representing the wealth of information available and ‘stretch’ being the key word…)

‘Stretching,’ of course, requires effort and sometimes pain. That’s why some people choose to walk on by, complaining that the tree branches should be lowered or that someone else should shake the money down and make it easier for them.

But those who are willing to stretch can enjoy the fruits that their efforts bring to them. And make a difference in someone else’s life.

Brittain Kovac’s great grandmother came from the same small country of Croatia as I did and settled in Strawberry Hill in Kansas City, KS. Her family loved the openness of the space, and the opportunity to own and care for land. Their entrepreneurial spirit was passed down to Brittain’s dad and to her as well.

They also passed down the sense of responsibility that comes with any such opportunity: the need to give back. When Brittain was around 13, she went on a mission trip to the heart of Jamaica. “It literally changed my life and the direction that I had planned for my future,” she says.

“It just really touched me… and then to come back home to everything we have here and to see the disconnect.”

Like most of the girls from her social circle, Brittain got herself a credit card for her 18th birthday. She then graduated with student loans and landed a job that would provide her with an exciting lifestyle and promising future, but was also leading her to put herself deeper into debt.

She continued to make regular mission trips to Jamaica, and her connection with the people there became even stronger. There, she was removed from the materialistic lifestyle and the patterns of living set out for her by mainstream culture, and she began to develop a different perspective.

“In 2009 I was in Jamaica on a mission,” she explains. “I was… thinking about my future and something in me changed… I said I’m gonna own a house in Jamaica.”

She gave herself twenty years to pay off her debt and save enough money to achieve her goal. Here, Dave Ramsey’s coaching and lessons in life and money matters came into full effect – she’d listened to him on the radio as a teenager, driving around with her dad, and now decided that she’d take up his challenge to become debt free. He provided a clear map, an actionable guide she could follow.

Brittain explains that she was able to sacrifice many short-term pleasures because she had a well-articulated plan of action and a sense of motivation that was even bigger than herself. “I had a goal to work towards. I had something… a greater purpose to work for.”

Only five years later, Brittain took her dad to Nashville, and in an emotional live broadcast of Dave Ramsey’s Show she revealed that not only had she paid off her student loans, but also the mortgage on the house she had bought in Kansas City.

Today, Brittain is living the life she was created for by traveling the world with purpose. She even found a way to give sleep a purpose when she opened HostelKC, a philanthropic organization that seeks to provide homes for the impoverished in addition to travelers’ lodgings in Kansas City.

“For every 300 beds that are booked we are able to build a home in Jamaica for a family in need,” she explains.

When I ask her how difficult it was to save all that money, get out of debt, AND start a business at such young age, she is honest. “[It took] tons of sacrifices,” she says.

Having a bigger picture and a bigger ‘why’ – her vision of providing homes for families in need – is what fuels Brittain’s everyday choices and actions. Her dreams and her efforts to achieve them affect how she shows up in the world, what she creates and all that she gives forward.

Her plans are to open more hostels where sleep has a purpose in Jamaica for mission teams, but she concludes that she wants to leave her path open wide: “I often remind myself… in a struggling time… to let go and let God.” 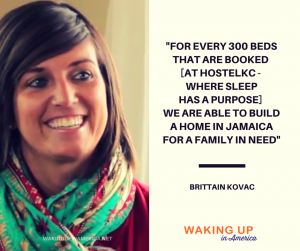 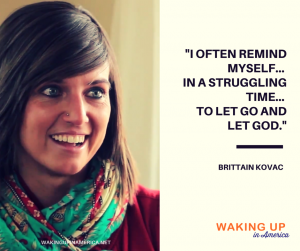 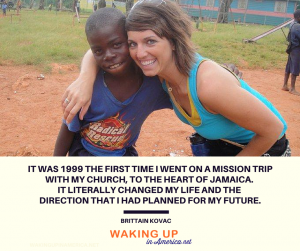