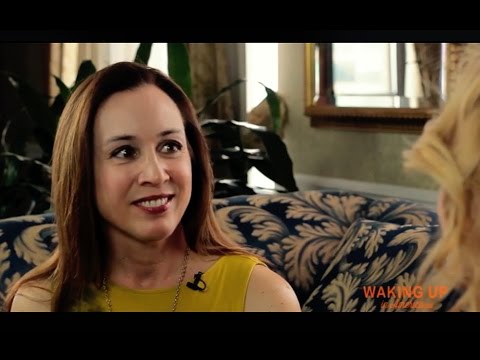 Balance is All. In Wine and Life (with Violet Grgich)

Violet Grgich is the proprietor and vice president of Grgich Hills Estates. In addition, she and her husband Colin Shipman founded Les Violettes, an early baroque ‘band,’ and regularly perform in concerts and events like Napa Valley Festival del Sole. Violet and I talk about living one’s own dream while continuing family legacy.

“Do you want me to play piano because you want me to be like you and continue your dream?” my then-six-year-old son asked me when I refused to let him quit taking piano lessons.

I smiled and said, “No, I just want to give you options, in case you find music useful while following your own.”

With that answer I knew I was continuing my parents’ legacy: they provided me with opportunities, but always left the choice to me.

In a way this was my dream, to raise my children with open paths ahead of them.
So, did I just trick them? Or did I happen to find that magic balance that feels infinite?

I reached out to Violet Grgich, the proprietor and vice president of Grgich Hills Estates, an iconic Napa Valley winery founded by her father Mike Grgich, to ask her how it’s possible to keep the family legacy while living your own dream.

The importance of Balance

Mike Grgich is a giant, but Violet is clearly not overshadowed by his success; she lets her own soul shine through with much genuine love and gratitude.

When I ask her about her story in our interview for Waking Up in America, she starts with an early memory:

“I was told stories about how they were nearly killed, how they had no food to eat, my Dad struggled to come to America to find a land of freedom… “

To every immigrant (and every winemaker) Mike Grgich’s journey is tremendously inspiring and empowering. He arrived in America poor but hopeful, and eventually achieved a level of success that placed him on the menus of famous restaurants, the White House wine cellar, in history books and the Smithsonian Museum. The cardboard suitcase he brought with him is displayed there along with a stack of books and his old beret, part of the wine section in the ongoing exhibition ‘FOOD: Transforming the American Table 1950-2000.’

“I always remember my father telling me that in America you can achieve whatever you want as long as you have the will and the passion. So when he was growing up in his very small, very poor village in Croatia, he was one of many, many lines of Grgiches… his father told him to every day do your best, every day learn something new, and every day make a friend.”

Her father wanted her to take over, but despite his nudging Violet couldn’t see herself ever running the business. However, she did take his advice to do her best, learn something new and make friends to heart. Being ‘painfully shy,’ as she describes herself, she leaned toward literature, science, art and music.

Violet holds a masters degree in music, playing harpsichord and specializing in early baroque music. Her husband is a musician too, and when she talks about music it’s with an extra degree of excitement.

So to her, it was a little upsetting when she would be away studying and following her passion, but her father kept asking only when she was coming back home to work at the winery.

I press her further: How does running the winery fit into her dream? It certainly seems now that she is living her own dream…did she have a ‘waking up moment’ that brought her to where she is now?

She tells me that it happened gradually for her, as she realized “that [the] ability to do everything and learn everything could be combined in this wonderful [family] business.”

“I used to love walking on the railroad tracks. And it was so hard at first to find your balance. You sort of bent back and you [fluttered] your arms about, but once you found that point of balance, that point felt infinite. It felt like no matter what direction you lean left or right, front or back it would hold you because it was infinite. Balance is infinite. It will hold you no matter what.”

When Violet found that infinite balance, she was able to grow and expand without the fear of falling. She can continue to learn, play and perform music, run the winery, be a mother, have a marriage, travel around the world, do whatever it is that she wants to do – she can continue her father’s dream as a part of her own.

When this balance comes from within, the dreams we follow are no longer under the influence or direction of external expectations, but come instead from the heart:

“Taking time, engaging in the present moment and listening to yourself, that’s pretty hard to do. And when you can turn inward, create that quiet space and listen, [your soul] will tell you.”

Violet’s dreams are clearly free, and entirely her own. And the way she is following her own path while keeping her father’s legacy is truly inspiring. 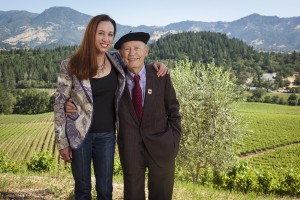 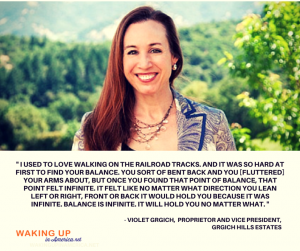 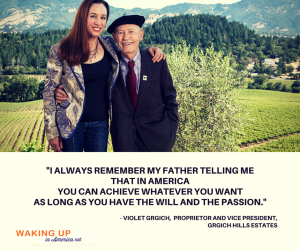 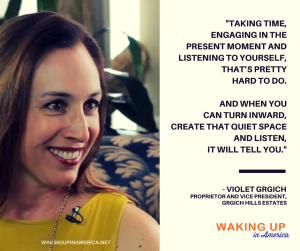 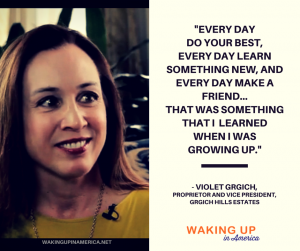