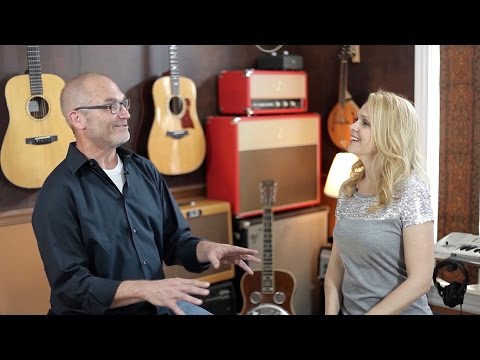 David DeLoach is an incredibly talented musician and author of Play Skillfully. He lives and teaches in Franklin, Tennessee, but with his free online guitar lessons at MasterGuitarists.com he’s been reaching millions around the globe. David talks about his journey from being a successful young guitarist to giving it all up in order to find some balance, only to, years later, wake up with a dream he couldn’t remember. David shares the wisdom he learned along the way and then, him and I play an old song, Southern style – right on his back porch.

I remember the day I woke up without a dream to follow. I was visiting a friend in Maine, staying in a picturesque attic room with a gorgeous view of the mountains. I was filled with joy and awe. I had just turned 22, and all of my dreams had come true.

I’d eaten lunch with royalty (at a Royal Polo Luncheon hosted by Prince Charles and the late Lady Diana), was a superstar (in my home country of Croatia), moved to NYC on my own, learned how to speak English fluently and had gotten a great review for my role in an American musical. I’d also had a profound spiritual experience which opened up my mind, my heart and my soul to be aware of the wonder of all that I’d been given.

All of these, I had dreamed up from a place deep within my heart and they made me feel alive.

But then, my insecurities kicked in and I became afraid that I had been given too much, and that I had used up all of my dreams-come-true passes. I decided to focus on goals and plans instead and worked hard to achieve them. Because I based those on the outside expectations and perceived ideas of a good life, they left me lost and confused, disconnected from who I was created to be.

After having my own awakening, I moved to Nashville to be surrounded by people who aren’t afraid to dream big, pursue their dreams and still maintain a stable family life.

While searching for a guitar teacher for my teenage son I ran into David DeLoach, an incredibly talented Nashville musician.

As nothing is a coincidence, David had a lesson for me that I needed to hear. I was deeply moved and asked him to share it on Waking Up in America. 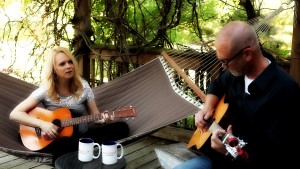 David grew up on a military base, and had a path to become an aerospace engineer carved out for him. Instead he became a guitarist, completely immersed into music.

“It was not unusual for me to practice six to eight hours seven days a week. And to gig five or six nights a week… It was a little bit out of balance, to be honest.”

He fell in love with an Argentine woman and realized he needed to make some changes in his life. So David quit the one thing he identified with, got a job as a ditch digger and then a full ride scholarship to study theology.

“When they handed me my diploma at the end of it all, I thought… I don’t feel any closer to God from all this stuff I’d learned in my head.”

He ended up working for a bank and built himself a successful career in the corporate technology world.

One day, David took his daughter to a routine check-up and collapsed in the doctor’s office.

“I got dizzy, my chest got tight, had trouble breathing and I felt like the life was leaving my body… I thought, this is it!… I’m dying.”

As the doctors and nurses worked to bring him back to consciousness, David had some incredible dreams.

“I woke up on the floor, and I was… like I’d been laying on a mountain streams… just felt like a clear water had been running through me, I felt so wonderful.”

For months he tried to remember what those dreams were that made him feel so refreshed and full of life… until he heard the answer:

“God told me. Those incredible dreams I couldn’t remember were the Incredible Dreams That I Couldn’t Remember. It was the dreams of my youth that I had forgotten. Of being a musician. And I instantly understood: those dreams will bring you back to life.”

David didn’t quit his day job, but he did pick up his guitar. He found himself practicing late into the night realizing that he couldn’t compare himself to others. Nashville was full of brilliant musicians.

So he embraced what was unique about him and decided to enjoy it in a way that brought him fulfillment, authentically and without fear. He developed a teaching style, wrote and published Play Skillfully, a comprehensive guitar book which was used at the Berklee College of Music in Boston.

One door kept opening after another and David found himself playing with more and more amazing musicians, including a big band jazz group and the Nashville symphony orchestra.

THE LESSON DAVID TAUGHT ME

His smile is contagious and so radiant, it makes me feel alive as I talk to him.

“Those dreams will bring you back to life,” David says. I nod and let my heart open a little bit wider.

Why be afraid to listen?

Remember the incredible dreams you’ve let yourself forget and then wake up to make them come true. 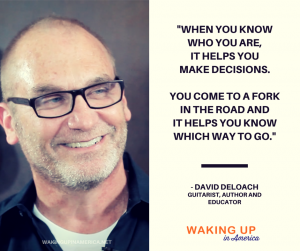 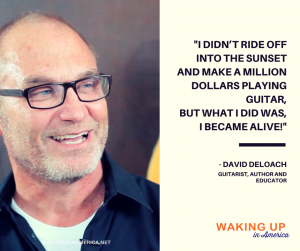 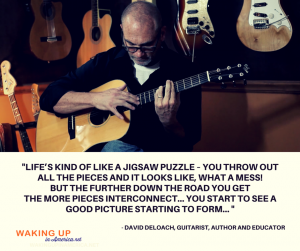