In Every Adversity Lies a Seed of Greatness (with Calvin LeHew)

5 min read
3 comments Watch LaterRemove Cinema Mode
Facebook Twitter Email Google+ LinkedIN
Calvin LeHew is an entrepreneur, developer, author and speaker. His unwavering belief that you 'become what you think about' has motivated his physical, mental and spiritual success and made him an important figure in the revitalization of historic Franklin, Tennessee.

Calvin LeHew is a powerhouse entrepreneur and the co-author of Flying High. His unwavering belief that you ‘become what you think about’ has motivated his physical, mental and spiritual success and made him an important figure in the revitalization of historic Franklin, Tennessee.

What image comes to mind when you think of success?

Does it look like sunbathing on a yacht in the Bahamas? Or sipping coffee in your spacious and sunny Manhattan apartment? Or running a global business from your laptop on the deck of your Tiny House built at an undisclosed location?

Can it look like riding on a tractor with your dog running alongside? Or sitting in the silence deep in the timberlands?

Calvin LeHew, with whom I sat down for an episode of the Waking Up In America show, always had a clear image of the success he wanted to achieve for himself. A friend of mine, filmmaker Peter Shockey, formally introduced me to him.

Peter knew I’d be interested in Calvin’s waking up moment, the experience that shifted his definition of success. In preparation for our interview, I read Flying High, the book Calvin co-wrote with Stowe Dailey that chronicles his life and the lessons he learned. At one point in his life, he found himself asking, like Peggy Lee’s song, Is this all there is?

He decided that he wanted more than money and fame.

In Every Adversity There Lies Within It a Seed of Greatness

During our interview, it becomes clear to me that Calvin’s life is a constant process of awakening moments, together with a constant awareness and faith that “we become what we think.” He became aware of the power of the mind, faith and intentions very early in his life.

“I was raised in the Methodist Church there at Hillsborough Leiper’s Fork. And I had a lot of Jesus teachings and it was in my subconscious that ‘As a man thinketh, so is he.'”

Calvin learned “The Power of Positive Thinking” from Norman Vincent Peale himself, and began teaching it on his own. He wrote down his goal to become a millionaire by the age of 35 and hit the goal two years early.

But Calvin warns that success, as we know it or think we know it, is not what it’s all about.

“I had wealth, but I wasn’t any happier… that old song… who wrote it? Is This All There Is?”

When I ask him about the steps to achieve success in our lives, I’m expecting a three-step mantra like the one he kept on his desk for many years: “Conceive, Believe, Achieve,” or Dr. Peale’s “Picturize, Prayerize, Actualize.”

“Go in silence and be alone… get away from TV, the cell phone, all these mechanical devices… and get as close as possible to nature.

Get into the silence and ask: ‘What is my mission? What am I to do next? Where am I to go?’ And answers do come.”

Calvin personally met three presidents, survived five crashes flying his experimental aircraft, became a millionaire at the age of 33, created Carter’s Court in Franklin (the seventh largest tourist attraction in Tennessee) and The Factory at Franklin. He served as member of the board of directors for a number of different organizations. In the end, he said, it’s the invisible and the spiritual that he wants more of. Not the physical.

Today he’s the member of only one Board of Directors, at the Institute of Noetic Science. And he says that success isn’t where we usually think.

“My uncle Earl in Lebanon, Tennessee had about 20 acres, a cow, some pigs and chickens. I didn’t look down on him but I thought I wanna be something more than uncle Earl. But you know what now?

I have a farm out here. I love getting on the tractor with my dog, and doing farm work like Uncle Earl.

We don’t have to be millionaires or top of the … That’s not where it’s at. It’s being ourselves, feeling comfortable inside, not holding grudges against other people, having love, forgiveness. I can’t say any more than that.”

I look at Calvin as he speaks and feel a tremendous gratitude towards him.

I want people to hear his message and avoid the disappointment that comes when our efforts are focused on a goal that we don’t actually want.

Imagine visualizing an image of success, employing all your power of mind, prayer and faith. You work hard, spending years, decades, even your whole life achieving it and then at the end realize that the image, your vision was not really what you wanted. It doesn’t really fulfill you.

To really know what success looks like for you or me, to be able to visualize our perfect image of success, we need first to wake up. We need to wake up to knowing who we are, what truly defines us, identify our unique gifts and our purpose in this whole picture of life and do our best to truly show up and be present. That’s where success is.

That’s why we need silence, where we can ask ourselves these questions without the distractions of someone else’s definitions and images of success.

The Factory at Franklin: FactoryAtFranklin.com 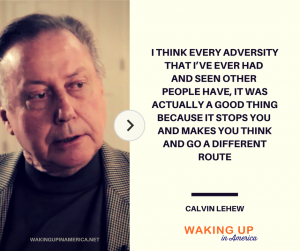 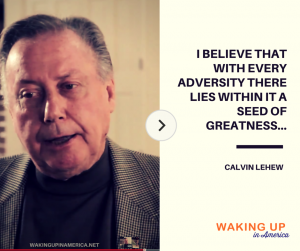 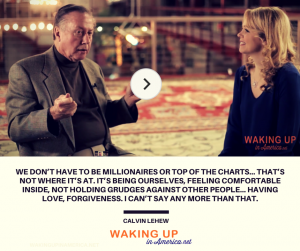